Following on from my last post on the “princess” archetype…

The Gestalt idea that all dream characters are parts of the dreamer and could be analyzed as such correlates well with the Jungian idea of the ancient archetypes and deeper personality integration.

In this tradition, the archetype of The Knight corresponds with the Animus, the divine masculine, existent in all of us regardless of our gender, but expressed more pronouncedly in men. The Princess corresponds to the Anima, the divine feminine, also present in all of us but more expressed in women. The Dragon, actively keeping the Princess captive until the Knight rescues her, is a metaphor for the Shadow, the Unconscious, the darker parts of our psyche that are potentially destructive and that stop us from integrating the divine feminine until the Knight takes action. The Wizard and the Witch are the Wise man and the Wise woman, parts of our psyche that possess deeper wisdom if we can access it. And the Queen and the King are older, wiser, realized versions of the Knight and the Princess, full of power, and in complete control of their responsibilities. 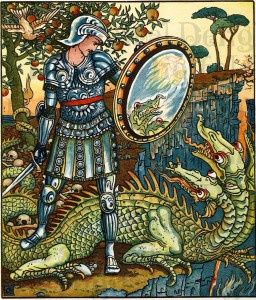 Clearly, the goal of the story is to defeat the Dragon – the shadow Self – and rescue the Princess – the divine feminine – to come back to the Castle – the Psyche – to become a unit, and grow wise and equal in their power. We all are every character in this medieval fairytale, and integration is the key to a rich and mature psyche. We integrate our parts when we consciously identify with the parts, we become the masculine, the feminine, the shadow, the wiser part of ourselves.

By not limiting children to identifying with the one character we think they should embody, we are further contributing to their integration, to their maturity and the wisdom of their every part.