By far the most useful therapy technique I have come across is the Two-Selves (also called the two-chair) technique.

Time and again in therapy I have observed how a person intends to change a behaviour that no longer serves them, only to find that another part of themselves has a totally different idea and refuses to go along with the changes –  it refuses to be controlled, disciplined, or to cooperate with what the person believes they want.

The person usually reacts negatively towards the non-cooperative part of themselves. They 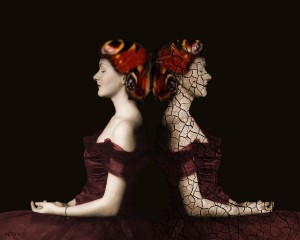 get angry at themselves, and try harder to submit the part into shape – only to find even more resistance.

In my experience, the part that refuses to go along with the plans always has very good intentions. It is a neglected, disowned and misunderstood part of our psyche. It is a part of ourselves that is fighting against us for very good reasons.

In therapy, when we take the time and the space to allow this part to communicate, we discover a whole side of ourselves that we didn’t know before; a part that is trying to communicate its very important message through resistance.

When the part is listened to and understood, it integrates into the Self. It is no longer disown and neglected, we no longer have to tame it by force and painful discipline. It becomes an organic aspect of the Self that reminds us who we truly are.

An example. A client of mine is battling with her weight and tries very hard week after week to control her eating. She tries to measure, to weigh and to discipline herself. Needless to say, another part of her refuses to go along; this part eats what she wants, reveling and refusing to be measured, controlled and disciplined in any way.

My client finds herself hating the part that refuses to submit to her desires.

In therapy, the hungry part spoke. This part had been measured and judged, neglected, disowned and beaten since she was 8 or 9 years old, and it refuses to be controlled. It wants to be free and will not accept to be dominated, not even by herself.

My client softened a lot when she discovered her “rebellious” part’s intentions. She no longer fights this part as much, and she is in the process of integrating this self that refuses to be controlled. And that kind of self-acceptance is a million times more valuable than being thin, wouldn’t you say?