I have been away for most of the summer, and while being in Mexico for an extended period is nothing new, getting married while in Mexico was definitely new.

Nobody thought I would get married one day. Not even me! I actively and vocally disagreed with the concept of marriage, and everyone knew how I felt.

So, when I decided to “marry” my boyfriend, I knew that something had to be different.

1. there would be no authority, religious or other ways. We would “marry” ourselves, in the presence of our loved ones.

2. it would have to be in the only place of magic and power I could think of: the moon’s pyramid in Teotihuacan. I have had visions and revelations while in the pyramid, and it has been a recurring theme in my art. I even made a short experimental film called “The Moon’s Pyramid” (Watch it here).

So, on Saturday August 24th, a group of friends and family gathered on the moon’s pyramid, and my lover and I “married” ourselves. Then a spiral of loved people surrounded us, sealing the bond of love around us. 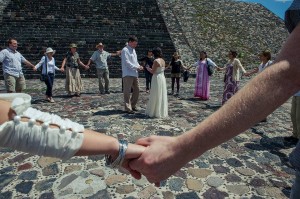 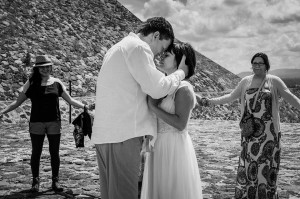 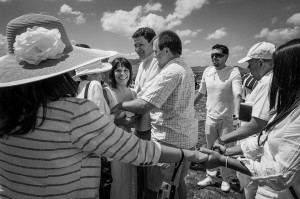 It was a powerful personal performance, meaningful for everyone attending. Especially me.

I believe that personal ritual and meaningful actions have a powerful effect in the psyche, even more so than prescribed and mechanized cookie-cutter ceremonies. We, as a society, need to create opportunities for people to design their own ceremonies and rituals, meaningful to them, with imagery that speaks to their psyche and their unconscious in the language of their dreams. Bring back art and personal meaning to everyday actions. 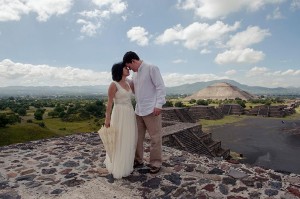